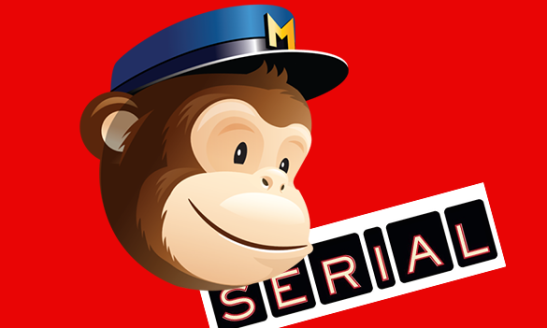 My fave email marketing people MailChimp are in the news for their latest advertising gig, which is sprouting memes and a trending hashtag.


Serial podcast: why is sponsor MailChimp getting so much attention?

The 19-second ad is the first thing everyone hears at the beginning of Sarah Koenig’s Serial podcast, and while the series is about a disturbing cold case high-school murder, the ad has grabbed everyone’s attention for its unintentional hilarity and charm.

MailChimp was approached by Serial’s producers in June, off the back of their existing relationship with This American Life, Serial’s parent podcast.

The ad consists of Dana Chivvis, the show’s producer, recording various people on the streets of New York saying the company’s name. It’s not exactly boundary-pushing.

But listeners have become obsessed with one woman’s awkward butchering of the pronunciation of “chimp”, rendered as “kimp”. Or keemp? Qimp?

The company itself has even embraced the joke, registering the domain name mailkimp.com. There is even a fan “MailKimp” Twitter account.

MailChimp’s marketing director Mark DiCristina says this most popular element of the ad was not planned.

“When the first episode aired, that was the first time we had heard the ads – so the girl who can’t pronounce [chimp] was totally spontaneous,” he told AdWeek.

(The jury is still out on whether laughing at a presumably non-native speaker’s pronunciation of chimp is acceptable or not.)

The advert then ends with a very enthusiastic – and supposedly unscripted – remark from one of the people featured, who says she uses MailChimp and “loves it”.

“I actually use MailChimp!” has become a meme across social media.

Indeed, the advert has become such a hit that in the dedicated Serial parody, one of the best bits is their sending-up of its sponsor. They even dedicated a whole episode to just the advert, The Investor.

Some people are even joking that the girl who mispronounces chimp is the true murderer at the centre of the podcast’s investigation.

But what exactly is MailChimp?

MailChimp is an email marketing software company, founded in 2001. Originally the company was going to be called ChimpMail, but that name was (inexplicably) already taken.

Its mascot is a chimp in a postman’s hat, and its tagline is the now ubiquitous command: “send better email”.

MailChimp’s software allows users to “design, send and share newsletter templates”, and it integrates with Google Analytics so that users can monitor the performance of their newsletters. There are also subscriber profiles, and options to send automated mailouts to Twitter followers.

Originally just paid-for, MailChimp later moved to a freemium model (users can sign up for free, but have to pay for certain features). The company boasts over 7 million business users – as referenced in the Serial advert – and is used to send more than 500 million emails a day.

Has its Serial advert boosted profits?

DiCristina maintains that the company’s sponsoring of Serial was not intended to boost profits, but to raise awareness of the service.

“We haven’t really tried to understand whether it’s driving growth. Frankly, the idea is not for us to drive people from the ad to signing up for MailChimp. It’s more about creating awareness of this company,” he said.

And the company has succeeded. Engagement Labs reports that MailChimp has gained 6,891 Twitter followers since the beginning 3 October when the series began.

The Guardian counts 1,500 instances of the #MailKimp hashtag on Twitter since the premiere of the podcast. Amobee Brand Intelligence calculated that 2,488 tweets have mentioned Serial and MailChimp together.

The viral reaction to MailChimp’s ad has inspired SquareSpace and Audible.comto advertise with the podcast.

With the recent announcement that Serial will be given a second series, the company has confirmed it will continue to be a sponsor. But this sort of genuine, organic, viral reaction probably can’t be repeated, DiCristina admitted to Quartz.

“I don’t know if we want to try to recreate the magic that happened with the ad. We’ll probably just want to do something completely different”, he said.